Some say infographics are dead. Others say they have simply grown up, gone on to bigger and better things—think data visualization. And a certain group even argues that infographics—visual representations of content—don’t have enough SEO firepower left for continued investment.

Still, others are steadfast proponents of the humble infographic (hint: that’s us). 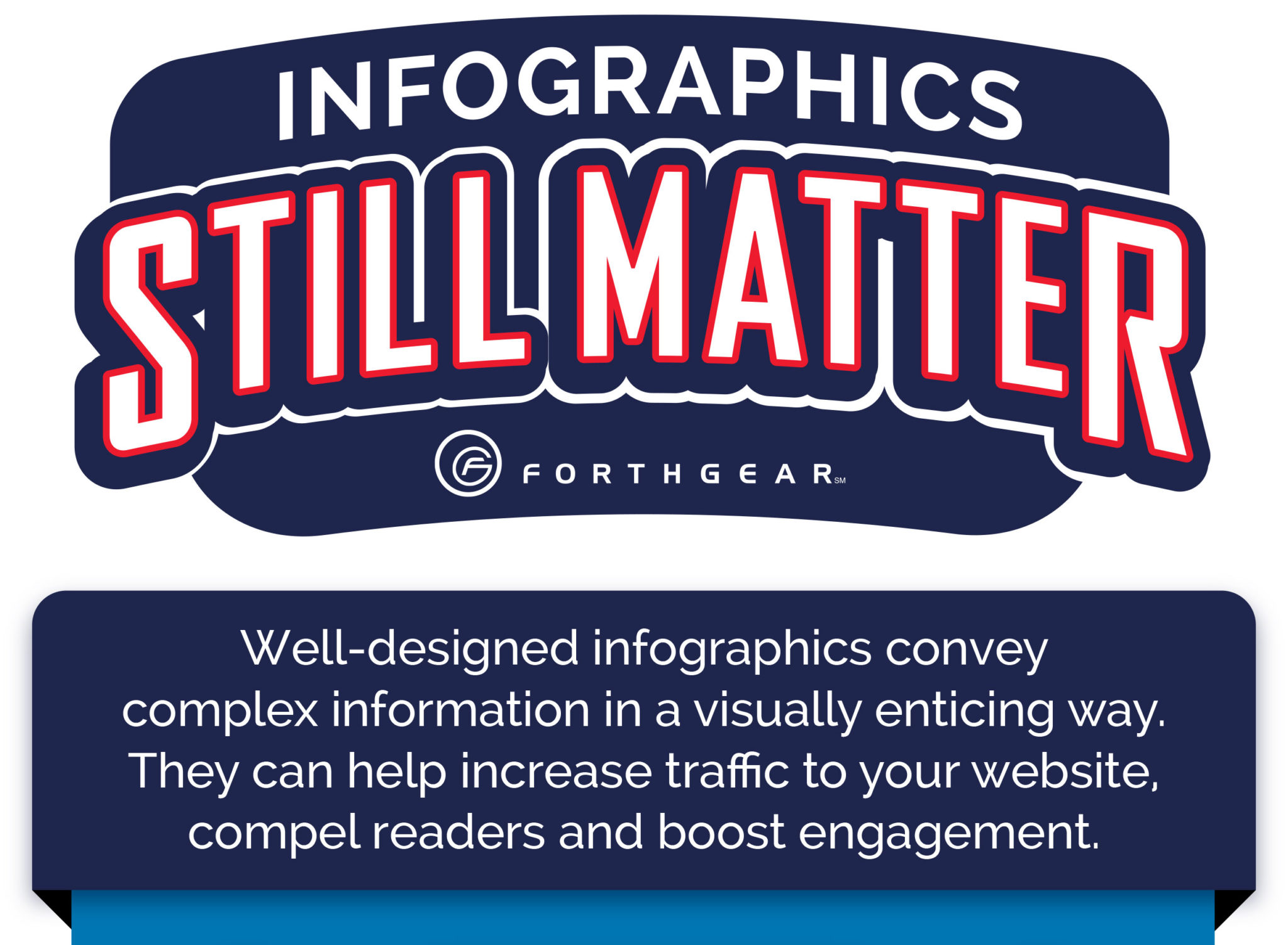 And trust us, there are plenty of reasons to believe in the audience-grabbing power of the infographic:

• Infographics are liked and shared on social media three times more than any other type of content.

• According to research, 65% of people are visual learners.

• Infographics can increase web traffic by 12%.

• According to the Content Marketing Institute, infographics have had the biggest increase in usage among business-to-business marketers over the last four years, at 65%.

• Infographics are the fourth most-used type of content marketing, according to HubSpot.

A well-produced infographic can help communicate complex ideas or simply make information easier to digest. In fact, according to research, people following directions with text and illustrations do 323% better than people following directions without illustrations. Simply put, infographics are compelling visual storytelling and consumer education devices.

In a world in which your audience is feeling increasingly time-crunched, it’s critical to get noticed . . . and fast. That just happens to be what infographics do best.

Infographics also hold great distribution potential. From external websites and emails to social media and blogs to (gasp!) valuable print assets, these visually-enticing pieces of rich media hold their own against a digital backdrop of videos, GIFs and interactive data visualizations.

So, how did the digital marketing industry wind up adamantly arguing over the trusty infographic?

Simply put, infographics fell victim to their own success (at least in some marketer’s eyes).

Infographics, in some cases, have suffered from one of the worst offenses in digital marketing . . . bad design. That’s right, creating an infographic just to create an infographic isn’t enough. It requires thoughtful design, content planning and strategic distribution.

The problem got so pervasive that there are entire Pinterest boards dedicated to bad infographics. Ironically, poorly designed infographics do just the opposite of their successful counterparts—they make information harder to digest, not easier. These less-than-stellar graphics poisoned their own bread and butter.

Journalists, tired of being bombarded with bad visuals, put filters on their emails sending anything with the slightest mention of the word sailing into the trash. Online publications rejected posting many subpar infographics, and even social media users lost interest. Seeing the associated downfall of infographics’ performance, some professionals have errantly sent them the way of the dodo.

The infographic is not dead; nor has it ever been. A well-designed infographic will convey complex information in a visually enticing way. It will gain shares and clicks on your social media channels. It will engage your audience in ways plain text simply can’t (present blog excluded, of course!). And it may even increase traffic to your website.